Texas is one of the few states in the United States that allows it’s residents to carry firearms. Any resident of Texas can carry a firearm, they just need to go through the proper procedures in order to carry one. While you can purchase firearms in the state of Texas, you are not able to sell, rent or loan a gun to anyone that you know will use it against the law.

Texas is bordered to the south by Mexico and the Gulf of Mexico, to the north by Oklahoma, to the west by New Mexico, and to the east by Arkansas and Louisiana. Texas is both the second most populous and the second most extensive of the U.S. Open carry is legal in Texas with a valid license to carry.

Right to own – What can invalidate this?

Regarding the right to bear arms, the Texas Constitution states:

“Every citizen shall have the right to keep and bear arms in the lawful defense of himself or the State; but the Legislature shall have power, by law, to regulate the wearing of arms, with a view to prevent crime.”

Restoration of rights if taken away

You must apply for a license to carry a concealed firearm in Texas. You will need to provide an application, two photographs (passport quality), fingerprints, proof of residency in Texas, age verification (at least 21 for concealed firearm), a certificate showing you are proficient to use a handgun, authorization to release your records and an affidavit stating you understand the laws.

Special requirements for owning a gun

There are no real special requirements for owning a gun in Texas. If you wan to carry a concealed firearm, you need to go through the application process to get that approved. Because Texas does allow it’s residents to carry firearms, there are a few places you are not allowed to take the firearm. These include: Courts, businesses that sell alcohol for consumption on site, any type of school, nursing homes and hospitals, amusement parks, polling place on the day of an election, churches, race track, jails and prisons, secure area of the airport. You can also not carry a firearm while you are drunk, and you must have it concealed at all times.

Texas is one of the most lenient states when it comes to firearms. All residents are eligible to own one, unless they are felons. While there are certain places firearms are not allowed, it is very common to see residents of Texas with shotguns and rifles in their cars.

By statute, Texas will recognize another state’s license to carry if that state recognizes Texas’ license:

Since there is no national carry license, as with the other states, some states are reciprocal with Texas and some are not. Anyone contemplating reciprocal carry should check with the official list maintained by the Texas AG at the point in time the reciprocal carry is to occur.

Texas permits anyone who is legally allowed to possess firearms to carry them in vehicles without a permit. People without permits must keep handguns concealed and out of sight when in vehicle.

Yes, if you possess a valid concealed handgun license/permit and the establishment derives less than 51% of its income from the sale of alcohol for onsite consumption. If there is a “No Gun Sign,” You are prohibited from carrying into the establishment. You are prohibited from carrying while You consume alcohol or are under the influence of alcohol.

Texas has both Castle Doctrine and SYG laws. There is no duty to retreat from any place You have a legal right to be. You may use force, including deadly force, in defense of yourself or others if You reasonably believe it is necessary to prevent imminent death, SBI, the commission of a forcible felony, or to stop the unlawful & forcible entry into a dwelling, place of business, or occupied motor vehicle.

In Texas it is unlawful to possess a firearm in the following prohibited places: 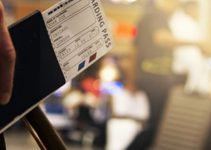